AMAC Aerospace – The Authorised Pilatus Centre in the Middle East

AMAC Aerospace is known primarily for complex modifications and outfitting of large private aircraft. It began marketing the PC-12 in the middle east in 2012, via its subsidiary in Istanbuly, Turkey. Pilatus Aircraft Ltd

AMAC stands for two things: “Aircraft Maintenance and Completion” and “Aircraft Management and Charter”. Both services are offered by this company which was originally established in 2007 in Switzerland, at the EuroAirport Basel-Mulhouse. The AMAC Group is now present at six locations in four countries with a workforce of around 1,000 employees. Besides Basel, AMAC also has offices in Kloten (Switzerland), Auch (Southern France), Beirut (Lebanon), Bodrum (Turkey) and Istanbul.

Services for the PC-12 in Istanbul

The partnership between Pilatus and AMAC as Authorised Pilatus Centre goes back six years. Having owned and operated two PC-12 NGs since 2012, the AMAC Group knows the advantages of the PC-12 at first hand. Both aircraft are used regularly and each has over 2,200 flight hours.

As part of its expansion, AMAC set up a subsidiary in Istanbul and now offers PC-12 maintenance expertise in a 13,000 square feet (1,200 square metre) hangar at Istanbul Atatürk Airport. Opened in 2012, the hangar accommodates up to three PC-12s. This puts AMAC in an excellent position to provide first-class support to its customers in the region. 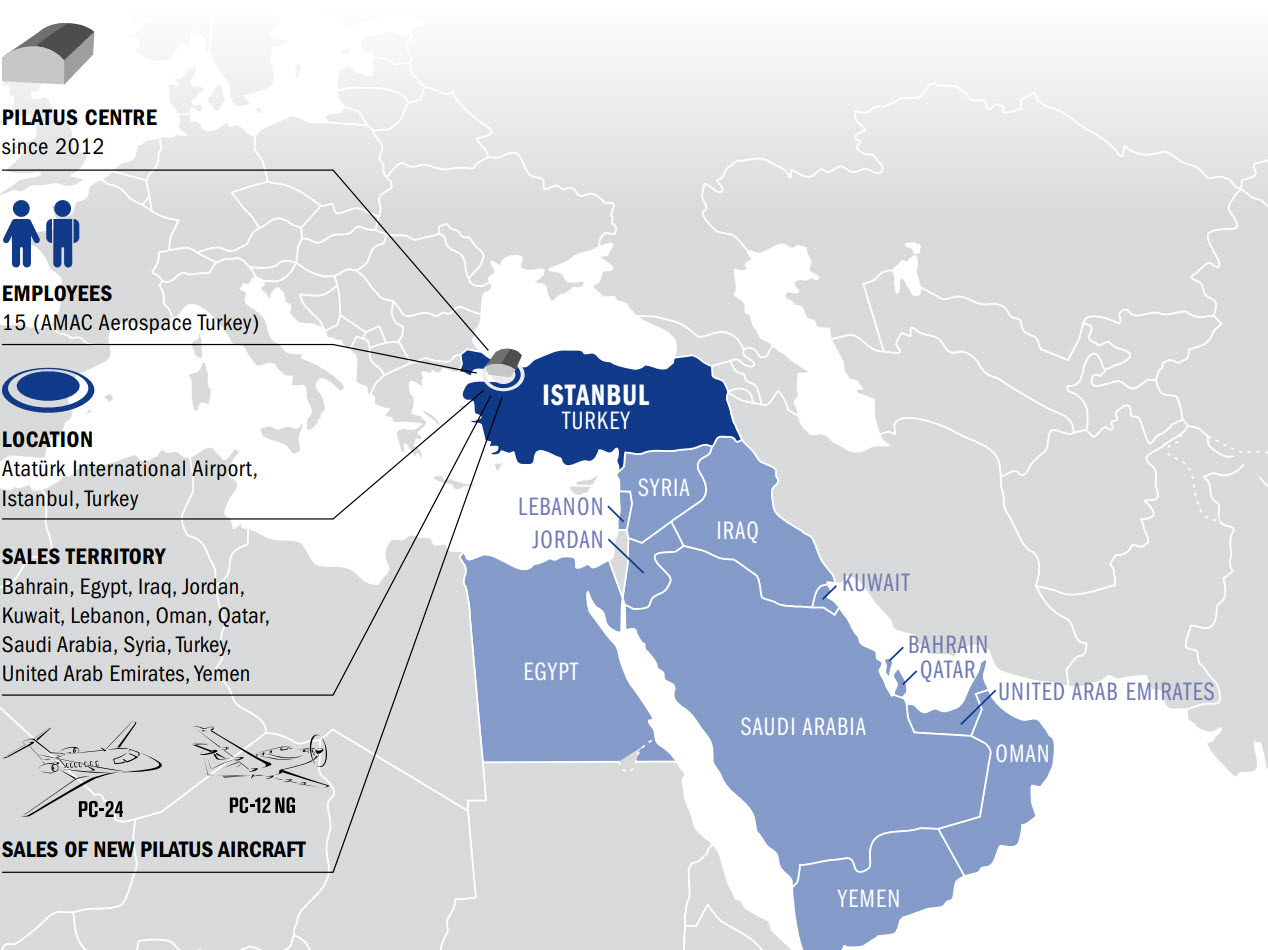 AMAC attended the Istanbul Airshow for the sixth time at the end of September 2018 and was available to talk to visitors about the many advantages of Pilatus aircraft. “We still encounter some scepticism towards single-engine turboprops amongst a certain set of civilian users in the Middle East”, explains Mohamad Badran, PC-12 Sales Manager at AMAC, “but we have successfully convinced more and more operators of the benefits of the PC-12 over the past six years”. AMAC is encouraged by the results of this year’s Istanbul Airshow. The team met many prospective customers, to whom the PC-12 NG was presented on the static display.

Big jets are the main business

Thanks to the many years of experience in aircraft maintenance and final completion brought to the table since the company was founded in 2007, AMAC now enjoys a worldwide reputation as one of the major players for complex assignments. The EuroAirport is home to the largest AMAC facility, where AMAC Aerospace occupies four huge state-of-the-art hangars covering a total area of 305,000 square feet (28,000 square metres).

Employees at the AMAC premises work on all types of aircraft from mid-size jets to Boeing 747-8, modifying them in line with the wishes of VIP customers, including heads of state and large companies. In August 2018, for example, an Airbus A330 entered one of the hangars in Basel for a C-check (a periodic major maintenance check) and simultaneous cabin modification. A recent completion and modernisation project on a Boeing 777-200LR took 20 months.

AMAC has also been appointed as an Authorised Pilatus PC-24 Centre and is well placed to market the new Super Versatile Jet very successfully thanks to its many years of jet experience and excellent network in the Middle East.