With well over 300 airports, the United Kingdom enjoys one of the highest airport densities in Europe. Many are relatively short grass strips dating from the Second World War – and therefore they are perfect terrain for the PC-12. Edwin Brenninkmeyer and his team have represented Pilatus in the British Isles and Ireland since 2015. Pilatus Aircraft Ltd

Edwin, founder and CEO of Oriens Aviation, has been a fan of flying for many years. He flew his first circuits in Locarno as a 17-year-old, while on holiday with his parents in Ticino in Switzerland. Some years later, he passed his type ratings for the Cessna XLS and Pilatus PC-12 NG. He also loves flying a Gnat as part of a historic squadron. This single-engine combat and training aircraft was developed in the 1950s by Folland Aircraft, a British manufacturer, and was flown by the Royal Air Force’s Red Arrows aerobatics team.

Edwin has long been a fan of the PC-12, too. His experience as both an aircraft owner and pilot has given him a good insight into all aspects of aviation. Often in contact with Bob Berry, the then Pilatus representative of many years for the United Kingdom, Edwin and Bob discussed future options for a continuing Pilatus dealership on many occasions in the past. The right moment came in 2015, and Edwin launched Oriens Aviation with a team that included Craig Lammiman, experienced with sales of business aircraft.

Edwin and his team have got off to a very successful start, both regarding sales of new PC-12 NGs and the task of raising the profile of the Pilatus brand in the British Isles. Through attendance at all the major business aviation air shows within their sales territory plus a large number of PC-12 demo flights, they have rapidly built a high degree of industry recognition for the name Oriens. Edwin believes the PC-12 offers many alluring advantages for British customers. “For a hunting trip to Scotland or a ski weekend in the Alps, the PC-12 provides enough space for all your kit, easy loading through the cargo door, plus the option to land on a short runway close to your destination.”

PC-12 maintenance in a prime location

With PC-12 service work in mind, Oriens acquired a modern maintenance outfit at Biggin Hill Airport early this year. Formerly Avalon Aero, the team led by Engineering Supervisor Steve Westran already has many years of experience servicing aircraft with PT6 engines, Citation and Hawker jets, and was taken over lock stock and barrel by Oriens. The new configuration gained some initial PC-12 experience with four maintenance assignments prior to the opening of the new Pilatus Service Centre under the name Oriens Maintenance Services.

The handover celebration took place on 15 February this year, attended by 130 guests, including representatives from Pilatus. There were three PC-12s to be admired too. Oriens Maintenance Services offers a full range of PC-12 services, such as scheduled and unscheduled maintenance, work under warranty and AOG (Aircraft on Ground) support.

London Biggin Hill airport is located some eleven miles (18 kilometres) southeast of London city centre. Edwin emphasises the importance of being present close to this metropolis of 14 million with its role as a hub within the United Kingdom. “The airport offers all that business aviation needs: a central location, customs, an instrument approach and long opening hours – from 6:30 to 23:00 during the week”, he explains. 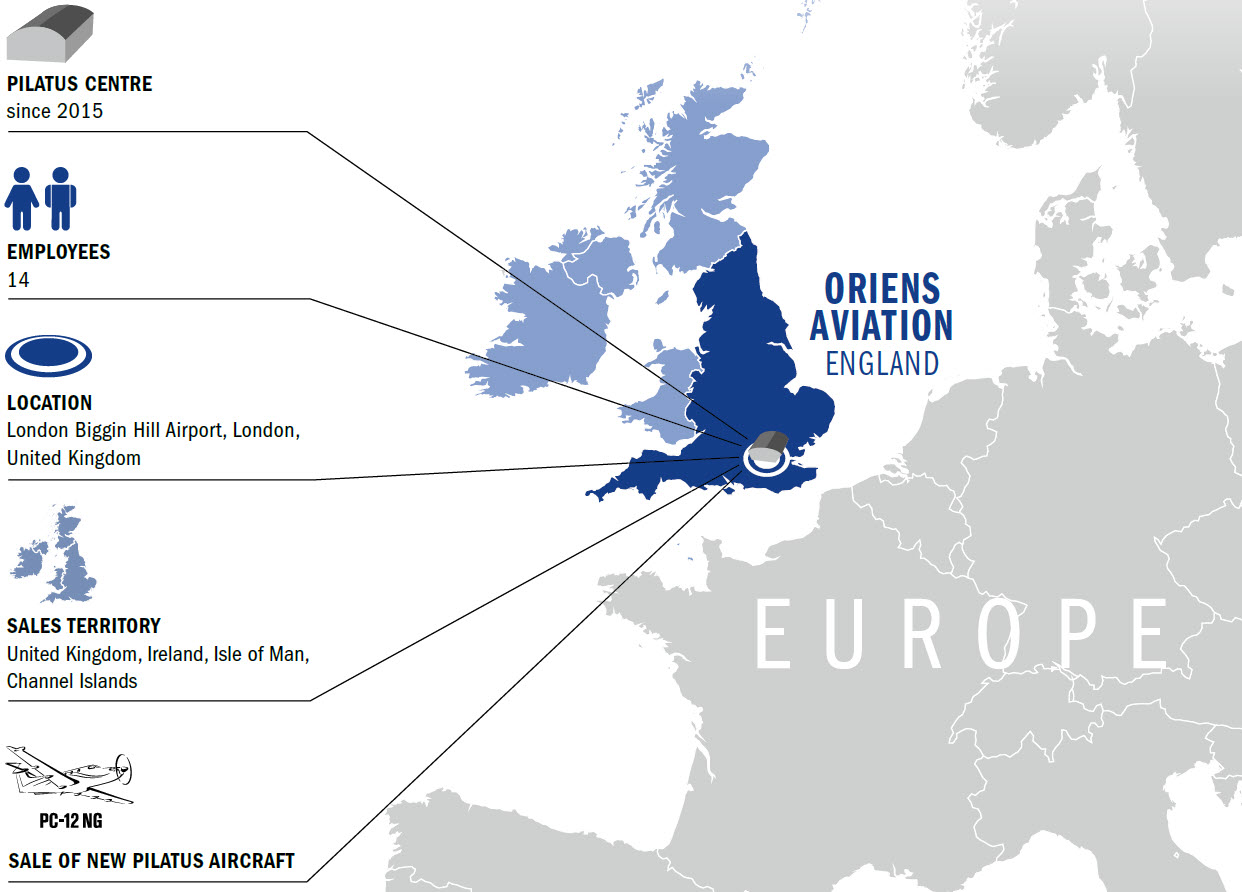 Busy festival season around the corner

The next few months will be important for Oriens Aviation. Oriens intends to draw on the current impetus at AeroExpo in Wycombe in June and the Goodwood Festival of Speed and Farnborough International Airshow – both in July – to present the PC-12 in its best light to potential customers. Its appearance at the legendary Goodwood Festival of Speed will be particularly important – this unique motorsports event attracts some 180,000 international visitors every year, including many PC-12 customers. With that in mind, Pilatus is delighted to support the Oriens team with a PC-12 and personnel on site.