While the market for business aircraft in Mexico is relatively small compared to the United States, Pilatus Center de México consistently achieves one of the highest market shares in the Pilatus global network. This performance is due to the efforts of managing director Adrian Zambrano and his team. Pilatus Business Aircraft Ltd

From its humble beginnings with one pilot, one mechanic and an eager young managing director, Pilatus Center de México is now a thriving business known throughout Mexico. It currently employs 60 people, all of whom are dedicated to selling and providing outstanding support to a fleet of more than 50 Pilatus aircraft based in the country of Mexico. The company operates from a modern 42,350 square feet (3,934 square metres) facility at Aeropuerto Del Norte in Monterrey. 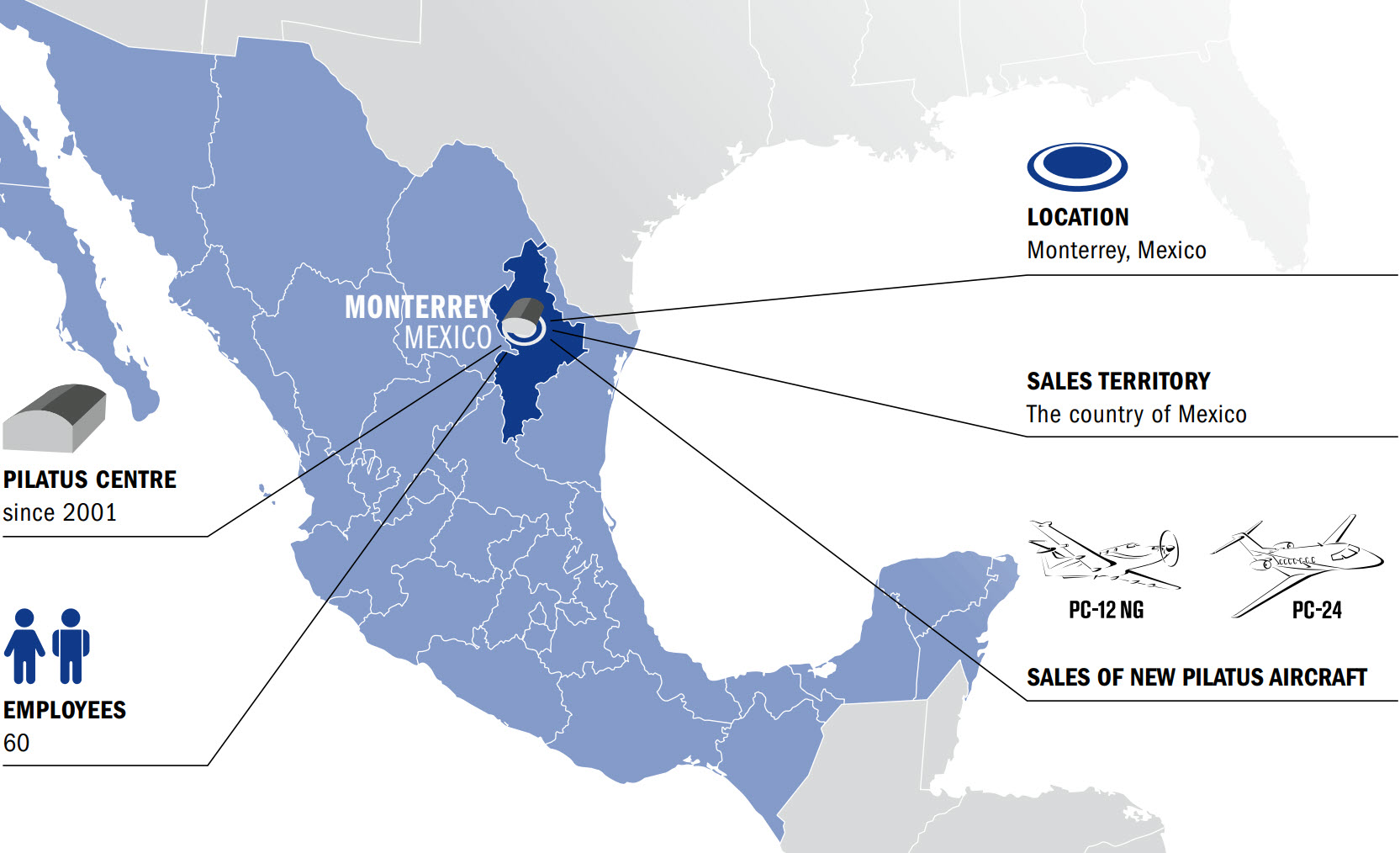 A fateful visit to Stans

How Adrian Zambrano’s business came to be appointed as Authorised Pilatus Centre for Mexico is a story about the undeniable importance of relationships. On a university trip to Switzerland in 1998, Zambrano and a friend were in Lucerne, and, being familiar with the Pilatus PC-7s operated by the Mexican Air Force, they called Pilatus and asked for a company tour. “They showed us the new PC-12 in Stans”, recalls Zambrano. “We were totally impressed with the cabin size, cargo door and avionics in this latest Pilatus aircraft.”

Back home again in Mexico, he overheard a conversation between two managers of a well-known building materials manufacturer about what aircraft to buy for their company’s mission in Egypt. Adrian suggested they take a look at the PC-12. Zambrano called Pilatus Business Aircraft Ltd in Colorado, and spoke to the then CEO, Chris Finnoff. Finnoff sent chief pilot Jed Johnson to Mexico the next day for a demonstration flight. Won over by the PC-12’s outstanding capabilities, the two managers purchased that very aircraft and dispatched it to Cairo to support their operations.

At the time, Adrian Zambrano had been thinking about moving to Zimbabwe to become a bush pilot. Perhaps it was Adrian’s enthusiasm for the PC-12, or the efforts of his father, Roberto, to channel his son’s aviation interests in a safer direction – whatever the case, the two of them decided they were keen to represent Pilatus in Mexico. They founded the Pilatus PC-12 Center de México in Monterrey in November 2001, and took delivery of their first PC-12 three months later.

The importance of personal relationships

Adrian Zambrano is quick to point out that personal relationships are critical to success in the Mexican market. His aviation roots go back to his grandfather, who was a dealer for Swift Aircraft. And so Zambrano grew up around aviation. Today, he enjoys flying the PC-12 NG for demo flights at work and an Aviat Husky for fun.

“The market and demand for the PC-12 are thriving in Mexico because this is the ideal aircraft for the modern owner, operator and passenger”, says Zambrano. His customers are especially attracted by the economy, design finesse, and precision associated with the Pilatus brand. The centre is also keeping a close eye on the new PC-24. Adrian predicts that the Super Versatile Jet will be a big success in Mexico, just like the PC-12.

Zambrano fosters his strong customer relationships with an annual barbeque fly-in at his ranch. “I’ve had customers tell me they bought the aircraft because they know how much I’m committed to my job and are confident that I’ll take care of things personally if a problem ever occurred.”